Forgive me for the long delay in writing. Things have been a bit crazy, so here is a quick update. First, I regret to inform everyone that the snowman is no longer. He held on as long as he could but ultimately succumbed to the elements (It was really only a couple of days, but still he tried his best.) 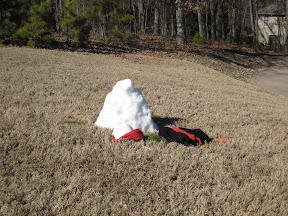 We have now moved on from snow storms to tornadoes and earthquakes. I haven’t felt one of the latter yet myself, but I’ll be sure to let you know when I do. Such is life in Little Rock.

﻿We have just returned from Florida and a visit to Disney World. Definitely not any snow there. The weather cooperated beautifully, and we had a lovely time. My feet and I have learned that my family are marathon Disney visitors. I’m very impressed with their endurance and skill at visiting this place. 🙂 I took many pictures and will share some of them in a later post.

I also need to share an update on Dad’s status. A couple of weeks ago he had a choking incident. They performed the Heimlich Manuever, and he is allright. However, the therapist then came to study his swallowing and determined that he needs to be on a pureed food diet. This is a classic progression of the Fronto-Temporal dementia, and it has actually taken longer for it to reach this point for Dad than is typical. (At least it seems that way from everything I have read.) The good news is that he doesn’t seem to mind the change and is still quite as content as ever. He is still placing stacks of magazines each month in the small amount of time he gets out. His faith is an example for us all. I hope to go visit again in a couple of weeks and will have more updates then.

Stay up-to-date by signing up for my Newsletter:

Fun in the snow!

Fun in the snow!

This site uses Akismet to reduce spam. Learn how your comment data is processed.

I have chosen to participate in a few select Affiliate Marketing Programs on this site. If you like what you read here, the TinCan & I appreciate your support of these affiliates as it helps us keep our dreams and goals alive. Thanks!
Read the full Privacy Policy & Disclosure
If you prefer to simply buy a Rivet for the TinCan or a cup of java for her owner, you can do that via PayPal.

Support the TinCan by shopping via our Amazon or Ebay Links:

© 2020 Am's TinCan. All material, photographs and text found in this blog are copyrighted. If you are interested in using them, please feel free to contact me.